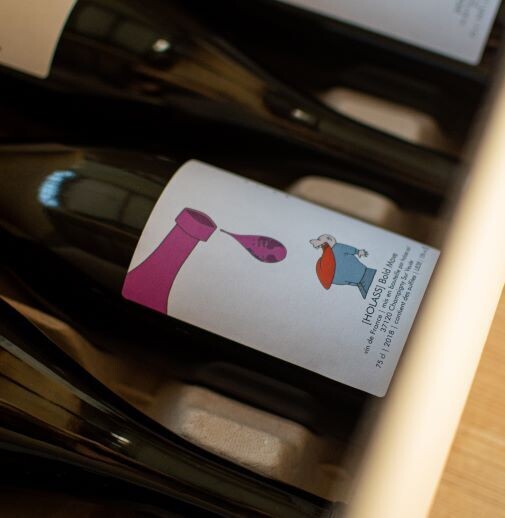 In 2018 January we moved to France in the heart of the Loire valley, hoping to start a little wine production there someday. A couple of months later we stumbled across an old vineyard with Cabernet Franc grapes growing on limestone, worked organically. It stood apart in a historic looking “Clos” surrounded by nothing but fields of cereal and a few farmsteads. It seemed obviously disconnected from the rest of the Chinon appellation visually and as it turned out to be officially as well. Kind of an outsider if you think about it; just as we were back then.

To realize our dream of producing our own wine in France, we were ought to make a “bold move”. Or more precisely several bold moves, one at each time along the way. To begin with, we needed to agree with the farmer who worked the vineyard, whether we could buy some grapes and actually select every single vine we wanted to pick, then allow us to process and ferment the grapes in their winery, as we lacked of space to do that in our cellar. Knowing a little bit about the attitude of the French vigneron towards such requests generally, it was definitely a bold move.

Next step was to ferment our painstakingly selected grapes and elevate the wine. For the fermentation we decided to use an open top bin, what was basically unknown in the area. Consequently, our 1000l fiberglass bin was marveled at by the locals as some sort of extraterrestrial object. Similar were the reactions to destemming the grapes by hand through an old fashioned basket and to pressing with an ancient manual press. After 30 days of maceration on the whole berries, we pressed and transferred the wine in our tiny cellar into a brand new, blond toasted 500l barrel. The choice of barrel also seemed to cause some confusion among even the well-known local winemakers as they were all advocating for used medium toasted barriques, which were generally considered as the best format to age Cabernet Franc. Against all the odds, we did stick to our plan to train our own barrel from scratch and not to introduce outspoken toasty aromas to our wine. For the first 18 months the wine was still busy with fermentation as we refused to use any additives which could have speed the process up. Eventually, after the second summer in the barrel it turned into a beautifully balanced, rich yet elegant wine with great depth and an immense structure. To preserve as pure as possible this exceptional taste, after 24 months of aging we bottled by hand directly from the barrel without any filtration.

This wine will always remain very special for us, for being the first ever vintage we produced in France, but also for giving us the thrill of discovery.

Save this product for later
Display prices in: EUR